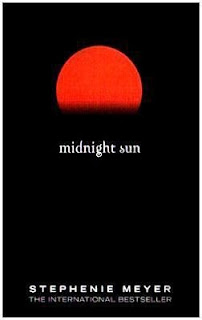 Midnight Sun is the much anticipated retelling of Twilight from Edward Cullen's perspective. An unedited partial draft was illegally leaked onto the internet in 2008; consequently, author Stephenie Meyer put the project on indefinite hold.
Shortly afterward, she posted a letter to her fans on her website including a link to the entire partial draft of the book so that those who wanted to read it could do so legally and with her consent; see URL for more information:

Please finish writing this book! I can't blame you for choosing to stop writing after being so betrayed, but for my own selfish sake I so wish you would finish it!

It was intriguing and fun to read Edward's perspective on things. I've read Twilight... well, more times than I'm going to admit so I didn't think I would be so disappointed when the story didn't continue- but I was! There's so much detail that fills in how Edward and his family interact behind the scenes and how Bella shakes up the mix. Not only did I enjoy seeing Edward's perspective but also hearing everyone else's thoughts through Edward. The only thing that could make it better would be for there to be MORE!