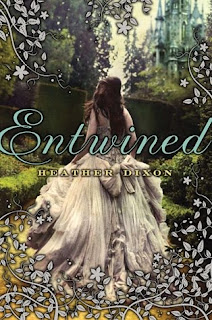 Azalea is trapped. Just when she should feel that everything is before her . . . beautiful gowns, dashing suitors, balls filled with dancing . . . it's taken away. All of it.

The Keeper understands. He's trapped, too, held for centuries within the walls of the palace. And so he extends an invitation.

Every night, Azalea and her eleven sisters may step through the enchanted passage in their room to dance in his silver forest.

But there is a cost.

The Keeper likes to keep things.

Azalea may not realize how tangled she is in his web until it is too late.

***
I could NOT put this book town. A great rendition of The Twelve Dancing Princesses. Great read for anyone who loves fairy tales.

Side note: I love the cover. So does my 1-year-old daughter. She wanted the book for herself!

Posted by Rebecca McKinnon at 3:47 PM No comments: 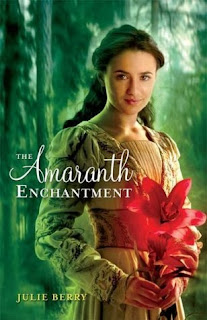 The Amaranth Enchantment
by Julie Berry

When Lucinda Chapdelaine was a small child, her parents left for the royal ball and never returned. Ever since, Lucinda has been stuck in perpetual servitude at her evil aunt’s jewelry store.
Then, on the very same day, a mysterious visitor and an even more bizarre piece of jewelry both enter the shop, setting in motion a string of twists and turns that will forever alter Lucinda’s path.
In this magical story filled with delightful surprises, Lucinda will dance at the royal ball, fall under the Amaranth Witch’s spell, avenge her parents’ death, and maybe — just maybe — capture the heart of a prince.

***
I absolutely love this book. I couldn't put it down. I read it in less than a day, and immediately turned back to the start for a second time through.

This is Julie Berry's debut novel, and the writing is fantastic. I always love a good fairytale, and this couldn't disappoint. I'm very influenced by cover art, and the second I saw this on one of my friend's to-read list I knew I had to read it, too. Then I saw what it was about and couldn't wait to get my hands on it.

Lucinda Chapdelaine's parents died in a carriage accident when she was just five. Sent to live with her uncle and his wife, she had a hard childhood. When her uncle dies, her aunt kicks her out of the house, but not before Lucinda is thrown into a bit of a mystery involving theft, an unusual gem, the Amaranth Witch, a villain who's managed to deceive everyone--including the king. And then there's the prince, of course. A perfect prince, who Lucinda knew as a child, and who's now engaged to a perfect princess.

I can't say enough good about this one. I think everyone needs to read it!

Posted by Rebecca McKinnon at 1:38 PM No comments:

She was Arizona Stevens.

Then she met Kellan.

***
I enjoyed this book. It was a fun, quick read. My one complaint is with the mother's memories. I understand why they were there, but they took me out of the story I wanted to be reading.

Posted by Rebecca McKinnon at 1:12 PM No comments: 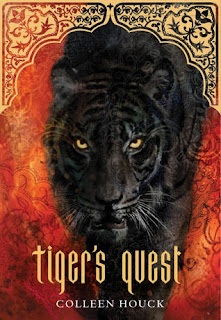 Kelsey Hayes is no ordinary college freshman. In fact, the eighteen-year-old girl has just returned from India, where she risked her life—and her heart—to rescue a handsome Indian prince from a terrible curse. Back home in Oregon, Kelsey is determined to move on, despite the lingering feelings she has for the man she left behind. She meets Li, a completely average guy who offers the promise of an ordinary, curse-free life. But just when Kelsey is ready to move on, Ren reenters her life, on a quest to reclaim her heart. Danger threatens their newly rekindled love and to save him, Kelsey must journey with someone else—a man who wants her for himself. The saga begun in Tiger’s Curse continues in Tiger’s Quest, as Kelsey finds herself in an epic battle between good and evil. From the shores of the Pacific Northwest to the jungles of India, the mountains of Nepal and Tibet, and the mystical realm of Shangri-la, this suspenseful tale of love, sacrifice, and redemption is not to be missed.

***
The first two books of this series were originally self-pubbed. I was given a copy of the 1st book as a birthday gift and fell in love with it immediately. I was hooked and pre-ordered this one. I love how in this book we get to see more of Kishan. In this book he is able to put aside a giant mistake in his past and hope for a happy future. Of course, that future does cause problems for our protagonist, Kelsey. I'm counting down to the release of book 3 in November!

Posted by Rebecca McKinnon at 7:46 AM No comments: 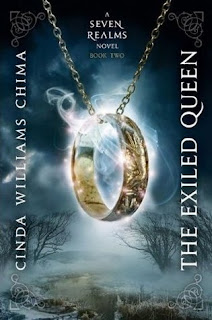 You can't always run from danger...

Haunted by the loss of his mother and sister, Han Alister journeys south to begin his schooling at Mystwerk House in Oden’s Ford. But leaving the Fells doesn’t mean danger isn’t far behind. Han is hunted every step of the way by the Bayars, a powerful wizarding family set on reclaiming the amulet Han stole from them. And Mystwerk House has dangers of its own. There, Han meets Crow, a mysterious wizard who agrees to tutor Han in the darker parts of sorcery—but the bargain they make is one Han may regret.

Meanwhile, Princess Raisa ana’Marianna runs from a forced marriage in the Fells, accompanied by her friend Amon and his triple of cadets. Now, the safest place for Raisa is Wein House, the military academy at Oden's Ford. If Raisa can pass as a regular student, Wein House will offer both sanctuary and the education Raisa needs to succeed as the next Gray Wolf queen.

The Exiled Queen is an epic tale of uncertain friendships, cut-throat politics, and the irresistible power of attraction.

***
I LOVE these books. Of course, I've loved everything I've read from this author. While this is most definitely fantasy I think even people who aren't huge fantasy fans would like it.

Now comes the hard part: waiting for the next book!

Posted by Rebecca McKinnon at 4:41 PM No comments: