Today, we're happy to spotlight Krista Holle's upcoming book, The Wind Whisperer
which will be released on October 15, 2013. 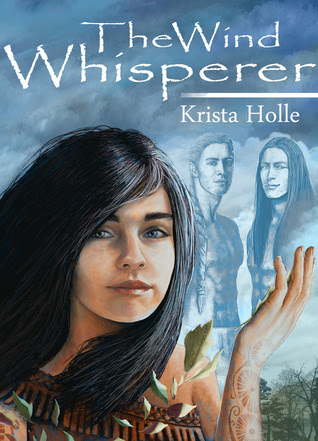 At fifteen, Anaii is the most important member of her tribe—and the most mysterious. Ever since Anaii can remember, the spirits of the wind have whispered of fertile hunting grounds and imminent enemy attacks. But when her people are ambushed by a brother clan without any apparent cause, the spirits remain eerily silent.

As the village prepares to retaliate, Anaii is pressured by her best friend, Elan, to marry him. It’s an old plea—Elan has spent a lifetime loving her, but Anaii only sees a childhood playmate out of an imposing warrior. Stifled by Elan’s insistence, Anaii escapes into the forest where she meets Jayttin, the beautiful son of the enemy chief.

Enamored by Jayttin’s carefree spirit and hope for peace, she repeatedly sneaks away to be with him, but when her deception is discovered, Elan is devastated. Pledging his lifelong affection, Elan gives her a passionate kiss, and Anaii begins to see her friend in a new light.

While Anaii is tormented over which man she must choose, the wind whispers of a new threat that could destroy both tribes. Only a union will afford a chance at survival, but the reality of that union is based on one thing—which man Anaii chooses to die.
Posted by Rebecca McKinnon at 5:30 AM No comments: 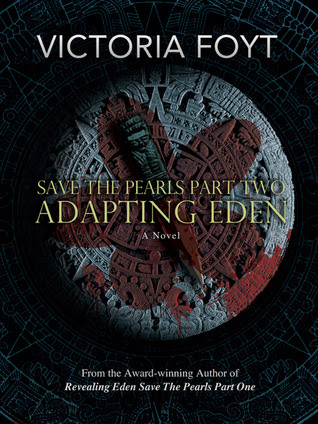 This book was provided by the publisher, Sand Dollar Press Inc., in exchange for an honest review.

In the sequel to the award-winning, dystopian novel, Revealing Eden, Eden Newman must adapt into a hybrid human beast if she hopes to become Ronson Bramford’s mate. She has no choice but to undergo her father’s adaptation experiment at his makeshift laboratory in the last patch of rainforest. But when the past rears its ugly head, Eden and Bramford must abandon camp along with their family and friends. Luckily, an Aztec tribe that has survived with the aid of a healing plant provides them with sanctuary—or is it? Too late, Eden realizes she is at the center of an epic spiritual battle between love and war. To survive, she must face her deepest fears or lose everything, including the beastly man she loves.

It's taken a lot of thought to decide where to start with this review. So let me say, I somewhat enjoyed the first book -- there were aspects that were fairly interesting, although they were slightly hidden.

This second installment was very hard for me to get through, and I'm not sure if it was the book itself or the fact that I was trying to read it while I was ill. So I put the book on hold, and finished it once I was feeling better. And I had to make myself get to the last page.

Ms. Foyt takes a lot of things to the extreme here. The fanatical racism (even if it IS reversed). The whiny, selfish teenager. The endless quotes from "Aunt Emily" Dickinson. The weirdness of a girl who is looking forward to her wedding getting naked with a girl she just met, and enjoying all the snuggling and fondling that follows. Eden's anger that her fiance doesn't trust her, and her hypocrisy when she does everything to blow his trust in her.

Not that everything was bad. The Aztec culture was interesting, and if the book had focused on different things, I think it could have been good. But it also would have been a different book. Overall, the good didn't come close to out-weighing the cons.

My final thoughts: I thought the first book had potential. The second book kinda ruined it.

2/5 stars
Posted by Rebecca McKinnon at 4:30 AM No comments:

The Year of the Great Seventh 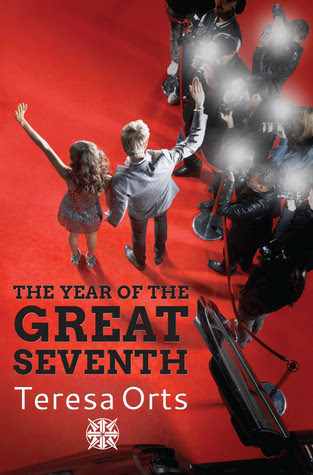 The Year of the Great Seventh
by Teresa Orts

Sophie has always felt out of step — an outsider, even amongst friends in her high school with all the hype about celebrity culture. Her life in L.A. seems to have been already written for her, but when her junior year starts, it all takes a drastic turn. When she crosses paths with the school's heartthrob, Nate Werner, they fall for each other in a way neither can understand. What they don’t know is that by giving in to their desires, they are unlocking an ancient Egyptian prophecy that threatens to return Earth to the dark ages.

To undo the curse, Nate and Sophie embark on an adventure that takes them across the country. But their quest is not only to save the world as they know it. It is also a fight for their very survival. Behind the scenes, there are those that are counting on them to fail.

Okay, first of all, I have to admit that I love just about everything to do with Ancient Egypt, so I had to read this book when I read that it dealt with an ancient Egyptian prophecy.

The whole plot idea felt really great, and had tons of potential. However, I have to admit, the beginning of the book was a bit rough for me. It didn't grab my attention the way I wished it would, and there were a number of cliche characters, and insta-love (which I DO see as stemming from a vision she has, but I'm not really a fan of insta-love in general). However, once we got past that, and things started to pick up, I was quite interested.

I liked the fact that while Sophie had an "in" with the Hollywood scene, that she didn't want it (don't be fooled by the cover, it's just one little part of the book).

Also in the plus category, Sophie had parents who were a big part of her life. They had high expectations, and paid attention to what she was up to. Nate's parents -- not so much.

Just be aware that this book doesn't cover the whole story. There's definitely more to come.

We're really excited to be a stop on the Guardians Blog Tour today!

Guardians is the final book of the Seers Trilogy, and it's certainly worth the read. 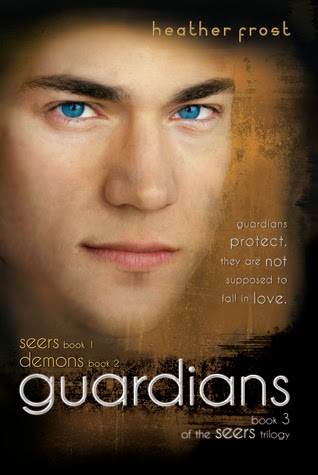 A vision of Kate's death causes Patrick to intensify his duties as Guardian. The Demon Lord is especially relentless now that Kate is the only Seer to ever escape his grasp. When Patrick discovers that Kate is the key to defeating their greatest enemy, he must choose between sacrificing the girl he loves or letting the Demon Lord win. You won't be able to put this final installment in the Seers trilogy down.

Well, first I have to say, I'm not a huge fan of this cover. Out of all of them, I liked the cover to Demons (book #2) the best. However, I can get past that.

Demons left us hanging with an ominous experience that tortures Patrick for much of this book -- but it's done very well, we don't get a lot of boo-hoo-ing, just great brooding looks (since he's trying to keep this all from Kate).

I'm very hesitant to say too much, because this book could easily be ruined by spoilers. So, I'll just say this: This book continues with the fantastic cast of characters, and adds some new ones. There are a lot of very emotional moments, and poor Patrick has to go through a lot (they all do, really, but since I enjoyed watching Patrick go through this -- yes, I'm a horrible person -- I'm focusing on him). The ending is very satisfying. Now go read it.


Ms. Frost was generous enough to agree to an interview, and gives us a little peek into her world!

* What part of writing Guardians was the most exciting? The most challenging?

The climax was certainly the most exciting, because it is the most emotional section of the book. I'm happiest when I'm right there with the characters -- when their feelings are my feelings, and my sole purpose in that moment is to describe the indescribable;  that's when I'm happiest as a writer, and "Guardians" is full of those moments. The tension just keeps climbing, for just about the entire second half of the book, and writing my characters' final battles was really an exhilarating experience. As for the most challenging, it's sort of a toss-up between the beginning and the end; in the beginning I just wanted to dive right into the action, but I had to pace my characters. But wrapping up a story is hard enough -- saying goodbye to characters I've worked with over the course of a trilogy was just plain hard. And even though they're still very much alive to me, it was a bit difficult finding the perfect balance in the ending.

* There are some great emotional moments in this book. Do you have a favorite?

That's a really hard question! Without completely spoiling the story, I have to say that my favorite emotional moments are when Patrick's suffering. Seriously, I feel terrible saying that, but whenever I write or read over the scenes he is in emotional agony, my heart melts, my gut twists, and I'm fighting tears in seconds. Whether he's begging something from Kate, or trying to find purpose after losing so many people he loves, I find myself very drawn to those moments.

* What's the hardest part of setting these characters aside now that the trilogy's ending?

I'm going to miss the friendships. The cast of characters in the Seers Trilogy are very alive to me, but also to each other. I never had to struggle for dialogue, because each character had a strong voice and opinion, and they interacted with each other so effortlessly.

* Imagine a shelf holding every book you've ever read. You can only choose one to save, and won't ever be able to re-read the ones you don't pick. Which one would you keep?

I wish my Nook counted, because I'd keep that! I hate questions like this, because my favorite book tends to be the one I'm reading at the time. So going off of that, I'd choose "North and South" by Elizabeth Gaskell, which I'm reading right now.

* Knowing you're a Whovian: If the Doctor showed up and offered to take you to any one time/place, when/where would you go (or would you just spend days exploring the TARDIS)?

I love this question so much, it's almost ridiculous! I wouldn't be too picky, honestly, but if asked by the Doctor, I would love to explore medieval times on Earth. I've always wanted to live back then, despite all the dirtiness, violence, lack of modern conveniences, etc. After strolling through a medieval village and visiting an occupied castle, I'd be up for anything.
Posted by Rebecca McKinnon at 3:30 AM No comments: