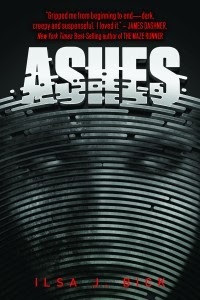 This is a pre-release review. Thanks to Net Galley and the publisher, EgmontUSA, for letting me read it early in exchange for an honest review.

It could happen tomorrow...

A cataclysmic event. An army of "The Changed."
Can one teen really survive on her own?

An electromagnetic pulse sweeps through the sky, destroying every electronic device and killing billions. For those spared, it's a question of who can be trusted and who is no longer human...

Desperate to find out what happened and to avoid the Changed, Alex meets up with Tom---a young army veteran---and Ellie, a young girl whose grandfather was killed by the electromagnetic pulse.

This improvised family will have to use every ounce of courage they have just to survive.

***
This is one of the better books I've read lately. With the EMP attack and the nuclear reactions, the world, society, falls apart.

For the first half of the book, there aren't a lot of people to follow, really just the three main characters. They're fantastically realistic, flawed but strong. (***SPOILER: The only thing here to be careful of is that the Changed become cannibals, and there are some very graphic scenes dealing with that. You may not want to read that while eating. END SPOILER***)

Halfway through, things take a very different route. Alex makes it to a town, Rule, where people are trying to live "normal" lives. There are secrets hovering under the surface of this community, and the fact that she wants to leave but decides to bide her time, then becomes complacent is a bit of a disappointment (although totally understandable). Still, with the secrets biding their time, there are things to try to figure out.

There is, of course, the love triangle, too. Both guys are nice, but I have a clear favorite: Tom. I felt he didn't get his fair share of pages. He got very few "good times." Chris seems like a mostly good guy, but he knows things that make me unhappy with him for not fighting it all. I think he's trying to do the "right thing" but doesn't know how. However, at the end he's making definite effort.

The end was an unhappy surprise. As the pages dwindled, things were not wrapping up properly, and the end was a total cliffhanger. Fine, as long as you know ahead that this isn't a stand-alone book, but I didn't.

If you like Hunger Games and The Maze Runner, read this.

Posted by Rebecca McKinnon at 1:39 PM