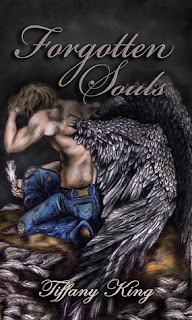 Any chance Krista Miller had at a normal teenage life is now gone. Less than a year ago, she lived under the radar, avoiding any relationships that would send her emotional sensitivities out of control. Little did she know that her life was destined for something more. Something that will test her very soul.

After escaping certain death at the hands of the man responsible for their mysterious past, Krista and her friends learn the truth about their origins and the purpose for their newly discovered abilities. Now, they must band together to fullfil their inherited, sacred duty. As Guides and Protectors, they must save Mankind's Forgotten Souls before they are lost forever.

I'm honestly not sure what to say about this book. I read it over two days, and the story is great. Adventure, romance, what's not to like? I wish I could say it's perfect. I opened the book with high expectations, and while it was good there was something that kept me from being able to engross myself in it (see note below). Also, I really felt like I should have cried at the ending but I couldn't. Maybe that just means I'm heartless and uncaring. However, the fact that I couldn't bring myself to wallow over it lost the book a star (sorry!). Still, the characters are intriguing, the plot line is fun, there are great new "links" introduced, and a major blow. I'm looking forward to book 3!

Side note: I read this on my Nook. I don't know if it's Ms. King's formatting, or if it's my Nook trying to be smarter than it is, but there were PROBLEMS. Frequently (like, several pages in a row) there were times when a word would be randomly split between lines. Usually when this happens, my Nook hyphenates appropriately, but so many times I had to stop and figure out that the random letter or two were actually the beginning or ending of a word. It was really annoying and distracting. I tried changing the font, hoping that adjustment would correct the problem, but the formatting forces the font to remain the same. I was so frustrated that I almost gave up two chapters into the book. So, while buying it on your Nook gives the author a slightly higher royalty percentage, for your own sanity get it on Kindle if you've got one.

Posted by Rebecca McKinnon at 10:49 AM