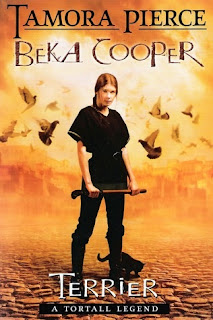 Tamora Pierce begins a new Tortall trilogy introducing Beka Cooper, an amazing young woman who lived 200 years before Pierce's popular Alanna character. For the first time, Pierce employs first-person narration in a novel, bringing readers even closer to a character that they will love for her unusual talents and tough personality.

Beka Cooper is a rookie with the law-enforcing Provost's Guard, and she's been assigned to the Lower City. It's a tough beat that's about to get tougher, as Beka's limited ability to communicate with the dead clues her in to an underworld conspiracy. Someone close to Beka is using dark magic to profit from the Lower City's criminal enterprises—and the result is a crime wave the likes of which the Provost's Guard has never seen before.

I don't know if 5 years counts as several years, but as this isn't a new release, I decided I could use it as a feature.

This book practically jumped off the shelf at me when I was browsing a little bookstore in Bermuda. I had to have it. I'd never read any of Ms. Pierce's books, despite having them recommended to me for years, and let me tell you: I was missing out.

Beka Cooper's story is written in journal form, which doesn't work for me very often. In fact, this is the only book I'd read where I didn't just toss the book aside. (I've since only read one other--the book that continues this story.) In this case, however, it's handled so expertly that I can't imagine the story being portrayed in any other way.

There world is so rich I can smell it, feel it, and believe I'm actually there. I have to admit, as much as I love Beka--she is a fantastic character--I also read this book for a Rosto fix.

If you enjoy mystery, intrigue, friendship, that thin gray line between black and white--I could go on and on, but I don't want to give anything away--this book is for you.

Posted by Rebecca McKinnon at 8:39 PM