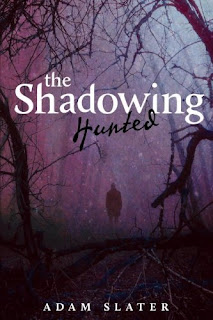 Hunted (The Shadowing, #1)
by Adam Slater

This is pre-release review. Thanks to Net Galley and the publisher, Egmont USA, for letting me read it early in exchange for an honest review.


What would you do if you found out that not only could you see ghosts, but a load of demons were about to cross over into our world, and you were the only person who could stop them? That’s exactly what teenager Callum Scott faces in my new horror series, The Shadowing. His only backup is ghost boy Jacob and his giant spectral dog, Doom. And those demons aren’t going down without a fight. Soon Callum’s being hunted, and by something you wouldn’t want to encounter in your worst nightmares… If you like skin-crawling horror fiction, you’ll love The Shadowing!

At the start of this book, I enjoyed it--with reservation. It took me a couple of chapters to become engaged in the story.

Callum is one of those characters you'd love to have as a friend. He's strong, down to Earth, and a just really good guy. And Melissa, the weird girl at school, is fantastic. And don't even get me started on the Grim and his friend, Jacob.

This story reminds me of some of the books I read growing up. It--dare I say it?--reminds me a little bit of The Dark is Rising. Yes, I liked it almost as much. (If you know me at all, you know how hard it is for me to say that!) Now I've totally set myself up to be disappointed by the rest of the series.

Posted by Rebecca McKinnon at 10:26 AM