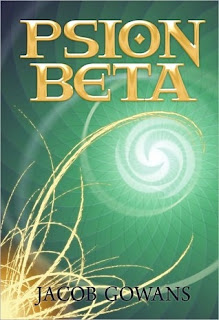 ammy, a 14-year-old fugitive, accidentally discovers he has the powers of a Psion.

Plucked off the streets, he is thrust into the rigorously-disciplined environment of Psion Beta headquarters. As a new Beta, Sammy must hone his newfound abilities using holographic fighting simulations, stealth training missions, and complex war games. His fellow trainees are other kids competing to prove their worth so they can graduate and contribute to the war effort.

But the stifling competition at headquarters isolates Sammy from his peers. Learning to use his incredible abilities powers is difficult enough, but when things go horribly wrong on a routine training mission, he must rely on the other Betas to stay alive.

The Silent War is at a tipping point; even one boy can be the difference.

But to do so, he must survive.

I absolutely loved this book. The characters were wonderful, the setting and background intriguing. My only complaint: the next book isn't out yet!

Posted by Rebecca McKinnon at 3:46 PM No comments: 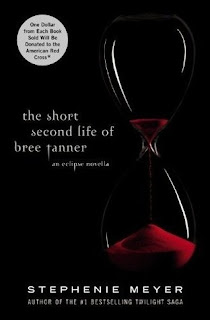 The Short Second Life of Bree Tanner
by Stephenie Meyer

Fans of The Twilight Saga will be enthralled by this riveting story of Bree Tanner, a character first introduced in Eclipse, and the darker side of the newborn vampire world she inhabits.
In another irresistible combination of danger, mystery, and romance, Stephenie Meyer tells the devastating story of Bree and the newborn army as they prepare to close in on Bella Swan and the Cullens, following their encounter to its unforgettable conclusion.
Bree Tanner can barely remember life before she had uncannily powerful senses, superhuman reflexes and unstoppable physical strength. Life before she had a relentless thirst for blood... life before she became a vampire.
All Bree knows is that living with her fellow newborns has few certainties and even fewer rules: watch your back, don't draw attention to yourself and, above all, make it home by sunrise or die. What she doesn't know: her time as an immortal is quickly running out.
Then Bree finds an unexpected friend in Diego, a newborn just as curious as Bree about their mysterious creator, whom they know only as "her". As they come to realize that the newborns are pawns in a game larger than anything they could have imagined, Bree and Diego must choose sides and decide whom to trust. But when everything you know about vampires is based on a lie, how do you find the truth?

I have to say, the first time I read Eclipse, Bree jumped off the page at me. In some ways I was more interested in her than in what was happening in the story at that point. How could she be so much more restrained than the other newborns, that she could hold off long enough to surrender? Why would she choose to? Would she have been able to adjust to the Cullen's lifestyle if she'd been allowed the chance? I had a lot of questions, and really, no answers. So I loved that there was a book that would delve into her life. And, as much as I loved it, I hurt the whole time because I knew how her story ended. Bree is more real to me than Bella.

5/5 stars
Posted by Rebecca McKinnon at 9:35 AM No comments: 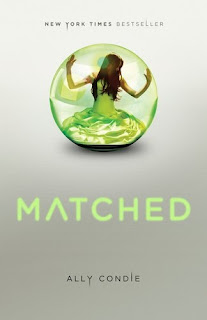 Cassia has always trusted the Society to make the right choices for her: what to read, what to watch, what to believe. So when Xander's face appears on-screen at her Matching ceremony, Cassia knows with complete certainty that he is her ideal mate . . . until she sees Ky Markham's face flash for an instant before the screen fades to black.

The Society tells her it's a glitch, a rare malfunction, and that she should focus on the happy life she's destined to lead with Xander. But Cassia can't stop thinking about Ky, and as they slowly fall in love, Cassia begins to doubt the Society's infallibility and is faced with an impossible choice: between Xander and Ky, between the only life she's known and a path that no one else has dared to follow.

***
This is an amazing story. It's easy to see how this could happen--a government making choices they think are in the best interest of the people, trying to make things equal for everyone (sound at all like the current re-distribution of wealth project to anyone?) that get out of control. Originally things were meant well, but once things are in motion it's easy to twist them.

The way the Society runs things was handled incredibly well, and the story taking place in this community is wonderful. The characters are amazing. This is one of those rare books where everything is incredibly real. I can't wait for book 2!

5/5 stars
Posted by Rebecca McKinnon at 2:45 AM No comments: 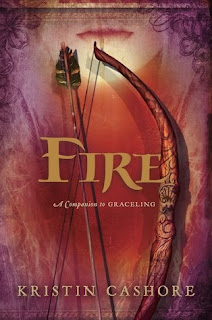 Beautiful creatures called monsters live in the Dells. Monsters have the shape of normal animals: mountain lions, dragonflies, horses, fish. But the hair or scales or feathers of monsters are gorgeously colored-- fuchsia, turquoise, sparkly bronze, iridescent green-- and their minds have the power to control the minds of humans.

Seventeen-year-old Fire is the last remaining human-shaped monster in the Dells. Gorgeously monstrous in body and mind but with a human appreciation of right and wrong, she is hated and mistrusted by just about everyone, and this book is her story.

***
After looking forward to this book for as long as I did, and having such insane expectations, I worried. And I worried some more. Then I read the prologue and first two chapters that Cashore linked to on her blog. After that, my expectations got even higher. And I got antsier.

I honestly don't see how this book could disappoint. Period.

Fire's story is fun, exciting, adventurous and heart-breaking. It's also a little more mature than GRACELING, for anyone out there wanting such a warning. However, I thought everything was handled well, and everything is there for a reason.

Going into FIRE I knew the cross-over character was Leck. And that was one of the things that worried me. I didn't want the story to be entirely about him--I was worried he'd take over. So I was pleasantly surprised that while he certainly had his part to play, his appearances were fairly short--which is good, since that kid really freaks me out.

Posted by Rebecca McKinnon at 1:00 PM No comments: