Dawn of the Knight 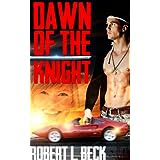 Dawn of the Knight
by Robert Beck

"One honorable young man can make all the difference..."

In this thrilling and suspenseful action/romance novel, a fatherless Canadian high school boy, Lance Rock, has been raised and trained by the United States government’s former top operative. For his senior year, Lance decides to travel to California in the hope of finding a girlfriend as well as freedom from his regimented life. Once there, he inadvertently ends up in the home of a mother and her two teenage daughters. He is forced to use his skills to defend them and himself from the woman’s ex-husband—a crime lord who has been terrorizing the family for over a decade!

This almost felt like two books: The one it wanted to be, and the one it actually was.

It took me a while to get into this one. I felt the opening was extremely weak: The first big chunk of the book happens while the MC sits in an airport. That's right, he's sitting still in an airport. He's looking at a scrapbook, and it sends him into all sorts of recollections. Yes, the info we learn is good, we get to know the character, etc., but NOTHING is happening to progress the story. It's all backstory that could be learned in other ways.

Once we get to the "main" part of the story, I hoped things would be a whole lot better. But the MC, Lance Rock, is beyond clueless (this is part of his backstory, and he has no experience in the "real" world beyond what one friend can offer) - so much so that it's extremely unbelievable.

Lance, as a character, wants to be a good guy, looking out for those around him and protecting those who are "weak." The last 1/4 (maybe) of the book actually became enjoyable for me.

This is a no-thinking-required book, and if I'd gone into it with lower expectations, I think I could have liked the corniness. But I do think said corniness was unintentional.

2/5 stars
Posted by Rebecca McKinnon at 8:41 AM No comments:

Order of the Seers Highlight

What would you do if you held
infinite power
in the palm of your hand?

Order of the Seers begins with the journey of Liam and Lilith Knight, a brother and sister who are hunted by The Guild, a ruthless world organization that seeks to capture and exploit Lilith's unique ability as a Seer to envision the future. Soon after they are forced to leave their home, Lilith and Liam discover that she is not alone. Other Seers like Lilith are routinely kidnapped and enslaved by the Guild for the purpose of consolidating wealth and power around the world... see more on Goodreads

In The Red Order, Book II in the Order of the Seers Trilogy:

The Lost Seers embark upon a world-wide mission to save their kind from the tyranny of the Guild and unveil their greatest weapon -  Developed in secret, The Restoration Project has the potential to awaken the supernatural ability within every man, woman, and child on earth and bring down the very foundation of the Guild’s power and authority.
But the Guild has other plans. Driven by the necessity for control, Crane Le Dieu creates The Red Order... see more on Goodreads.

Order of the Seers
Chapter 1: The End

Liam was losing his patience. “Aw, come on! Are you serious? You can’t
want to ride this thing again!”

Instead of answering her older brother, Lilli remained in her seat as
the Ferris wheel conductor looked on expectantly, hand outstretched and
waiting for another two tokens.

The way Lilli’s skinny arms hugged her book bag while she stared
blankly at the pressed metal floor of their “Fairy Land Caboose” made it
hard for Liam to stay angry. The sight of her looking so dejected softened
him enough to give the conductor his fifth set of tokens in less than 45
minutes. Liam settled back into his seat just as the lap bar clamped down
uncomfortably against his thighs.

“Lilli, say something. Why’d you drag me out here if you were just gonna
sulk? I hate the carnival, you know that.”

“I know something… okay? Just… trust me. We have to stay here.” Her
voice was so low he could barely hear her over the wind-up music that was
blaring from the overhead speakers.

“Did Mom say something to you?”

Lilli responded to his question with silence and a barely discernable
shake of her head back and forth. He tried again.

They both fell silent again as Liam took in the latest weird thing of the
day. Lilith Knight, or Lilli as she preferred to be called, had always been
strange. Even when she was five, she could beat Liam at chess lazily, without
even thinking about it. She would find things and give them to you before
you asked for them. Before you, or even she, knew why. Up until recently,
he thought she was just a freak. No biggie. All little sisters are like that, he told
himself.

It was only in the past few months that his perception of her began
to shift, after her prediction that he would catch his new girlfriend, Krista,
kissing his teammate Lance in the locker room after their championship
game. At the time, he’d brushed off her premonition as meddling. Krista
wasn’t even his girlfriend and his team was 1-1 with the whole basketball
season ahead of them.

He’d forgotten her warning completely until two months later when he
ran back into the locker room after winning the championship to get the
jacket he’d left behind and immediately smelled Krista’s perfume. When he
found them, two thoughts overshadowed the scene unfolding in front of
him. The first was that what they were doing wasn’t really “kissing,” though
he could see how a sheltered thirteen-year-old would describe it that way.
His second thought was that Lilli was right; she was exactly right. He was so
stunned by Lilli’s accuracy that he didn’t even bother to disturb them, leaving
his new ex-girlfriend and her new boyfriend to their business. From that
moment, Liam understood that Lilli wasn’t just a freak, or more accurately,
that she wasn’t a freak at all. She was special…gifted.

The sound of Lilli’s sniffling followed by the trembling of her body
as she began to cry uncontrollably broke the long silence that had fallen
between them. What the…, Liam half-mumbled as his mind swung from
irritation to absolute bewilderment. Slowly and deliberately, Liam moved his
palms down the front of his face as he fought the urge to shake the truth
right out of her and end whatever this was. But he couldn’t. She’s so brittle
already, he thought, without any idea as to why. So instead, he reached out
to envelop his sister in his arms, trying to soothe her and comfort her from
some unknown force.


Continue Chapter 1 of Order of the Seers HERE.  Read Chapter 1-2 of The Red Order HERE.

My name is Cerece Rennie Murphy, but, among my 5 siblings, I am known and teased by my superhero name, Wonder Worry, (and yes, I am a little worried about your reaction to what I just said). While in my youth, I used my superpower to whip minor setbacks into epic tragedies in 60 seconds flat, I no longer have the time to hone the skills I once possessed, which were handed down to me VERY CAREFULLY by my mother and her mother before.
Instead of spending my days imagining worst case scenarios, I am now on the front lines of true disaster prevention – treading the fine line between boo-boos and permanent brain damage, fighting crimes of curiosity, omission, absent-mindedness and sleep deprivation. I carry others down the winding, bumpy road of youth that starts out at the nexus of unique and brilliant but intersects with narcissistic serial killer at some distant point I hope fervently to avoid. As you might have guessed, I am a wife and mother of 2 small children. Luckily, my family lights up the sky so I never stumble too hard or lose my way.
I would lament the luxury of needless worry, but alas, I don’t have the energy. As I write this, I am losing a battle fought between my trusty sponge and a hardened glob of half-eaten cheese that traveled from the kitchen to the living room rug in the palm of a very small, but mischievous hand. Its stronghold on the fibers suggests occupancy of at least 2 days, but I’ll never know for sure. Rather than despair, I’ve chosen to retreat to my keyboard, noting that I have won the war - most of the rug is un-cheesed.
Before I worried. Now, I write.
I look forward to slowly, quietly, in my own shy way, becoming a part of this community. If you would like to get to know me and my work a bit better, you can visit me...


International Giveaway (except "Gift Package"), must be able to receive winnings, must be 18 or older to enter. See additional restrictions in Rafflecopter.

Posted by Rebecca McKinnon at 7:38 AM No comments: