We originally posted this review in August 2013. However, with our Witch Watch going on this month, we're going to revisit some of our favorite witchy reviews, as well as introducing you to some new witch books. Enjoy! 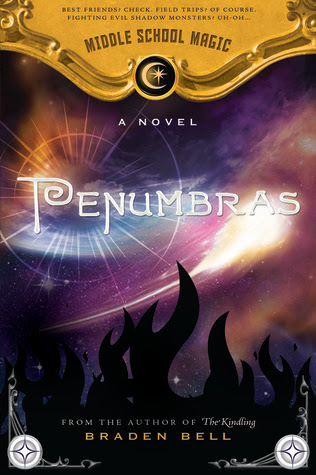 Conner, Lexa, and Melanie are back! Just when they think life is normal again, a dangerous shadow creature begins to hunt them. The trio must develop their powers in order to conquer this new peril and protect their school. Filled with action and even more magic, this book continues the exciting adventure in the Middle School Magic series.


Conner Dell didn't meant to blow up the school bus.
Or the bathrooms. In fact, he only wanted to go to sleep and possibly dream about Melanie Stephens. But explosions had a funny way of happening when Conner and his friends were around.
***
Conner Dell wants to be good--he really does. But he is terrified that he might be turning into a Darkhand, especially when new powers start to surface. What's worse, the Stalker is following Conner, but no one else seems to be able to see him. The Magi think he might be hallucinating, the guilt of what happened in the Shadowbox keeps weighing on him, and his relationship with Melanie Stephens is complicating things. Even for a Magi, Conner knows his life is anything but normal.

This is a great addition to the first book, The Kindling. We get to delve deeper into the characters, they have more internal struggles as well.

A big part of this book deals with Conner, and his fight with the darkness he senses within himself. However, parents don't need to worry - everything is age appropriate -- including the start of a romance.

The first book got me attached to the characters (one of the teachers in particular), and you really do care about what happens to them. There's a place near the end where -- yes, I'll admit it -- there were tears running down my face. Yes, I saw it coming, but that didn't make it any less real.

If you haven't started this series yet, you really should.