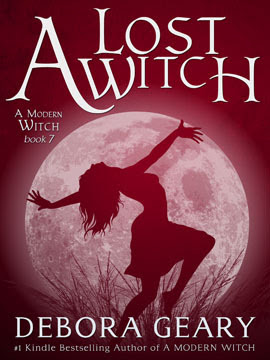 A Lost Witch (A Modern Witch, #7)
by Debora Geary

Hannah Kendrick has spent the last twelve years fighting for her sanity. And the doctor who has stood by her side has run out of options.

A small computer tracking spell will find Hannah—but can Witch Central save her?

This is the seventh and final book in the bestselling A Modern Witch series, but have no fear – your favorite characters will be back in September with the launch of the Witch Central series. Lots of witchy love, laughter, and tears yet to come :).


When I started this book, I was intrigued to see how it would all tie together.  It's unusual and heartbreaking while still being full of hope.  I love how Witch Central rallies to rescue Hannah while trying to stay aware of her needs.  Hannah really touched me.  I've seen people who've lost pieces of themselves- both for the better and for the worse.  Hannah is different without knowing why but manages to hold herself together in hopes of change.  She found her place to belong and was able to begin healing.

I think many people can relate in some way to Hannah.  While most people's examples aren't as dramatic, many people struggle to find where they belong.  Many lose pieces of themselves along the way.  I love Hannah's story and how she holds on through her challenges.

Posted by Rebecca McKinnon at 4:00 AM