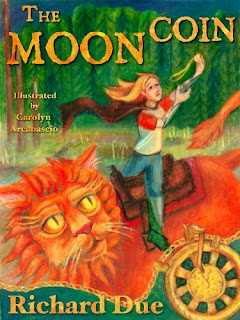 The Moon Coin (The Moon Realm Series, #1)
by Richard Due

This book was provided to us by the author in exchange for an honest review.

For Lily and Jasper Winter, the Moon Realm began with a single secret bedtime tale. As the children grew older, Uncle Ebb enthralled them with thrilling tales of the Dragondain riding horse-sized, catlike Rinn; mysterious tales of peerin-wielding lunamancers manipulating the magic that lies just beneath the surface of reality; exciting tales of flying dragons, swimming merfolk, stomping giants, and troublesome faeries. But as the magic of their childhood faded, so too did the tales. Eventually, they were just . . . good stories.

Now, nine years after it all began, Uncle Ebb is missing.

Lily and Jasper search for clues, but their uncle's mansion is full of distractions. A Tesla generator thrums in the basement. Prismatic electrimals flit around walls resembling underwater reefs. Then a most unexpected friend comes to their aid, leading them to a hidden room where they find a mysterious coin—the moon coin. Before the night is out, Lily is transported to the real Moon Realm. But the moons are in trouble. The Rinn of Barreth are under siege, and the lunamancers of Dain are beset by the very dragons they once loved. Most horrifying of all, the moon Darwyth has fallen to a villain named Wrengfoul, whose creeping evil now threatens to overshadow all the Realm.

Are Lily and Jasper too late to save the Moon Realm, or will they have enough time to write an ending of their own?

This book is beautifully written. It's entertaining. It sucks you in until you almost believe you're a part of it. The moons we visit in this book are richly imaginative.

Lily and Jasper have heard tales from the moon realm for years. In this book, Lily finds herself, quite unexpectedly, on a moon she believed only existed in the tales her uncle shared with her and her brother.

I was laughing within minutes of picking up the book, and would have read it in one sitting if I'd had the chance.

This book leaves me with two concerns:
1. There is more description than in a lot of books for this age group right now, making me wonder if some kids will miss out on the great story because they aren't used to it. (And they WOULD be missing out!)
2. I have no idea when the next book comes out, and I want it NOW.