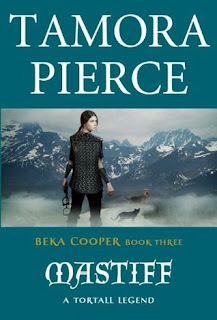 The Legend of Beka Cooper gives Tamora Pierce's fans exactly what they want—a smart and savvy heroine making a name for herself on the mean streets of Tortall's Lower City—while offering plenty of appeal for new readers as well.

Beka and her friends will face their greatest and most important challenge ever when the young heir to the kingdom vanishes. They will be sent out of Corus on a trail that appears and disappears, following a twisting road throughout Tortall. It will be her greatest Hunt—if she can survive the very powerful people who do not want her to succeed in her goal.

I have been waiting - impatiently - for this book since I picked up the first in the series.

Beka is a fantastic character, and I really wish this was more than just a trilogy. I could read about her forever.

Mastiff was everything I hoped it would be. (Well, almost. I would have liked to have more of Rosto.) I was sad that Goodwin wasn't there more, but since she was big in the second book, it was Tunstall's turn.

Can I just say, I love Tunstall? He's always been one of my favorites. And now, even just thinking about Tunstall and this book, I want to cry. Is it bad that I get so attached to characters, that they become my best friends?

Right off, I loved Farmer Cape. He cracked me up, trying to irritate people, pretending to be all back-woods ignorant.

If you haven't read the Beka Cooper books, you've really missed out. They're some of the best books I've ever read!