The Lady of Chains and Other Stories 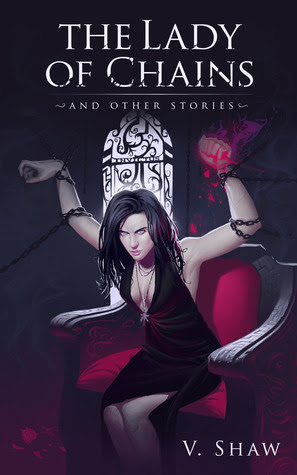 The Lady of Chains and Other Stories
by V. Shaw

“Remember; you have seventy-two hours to do the deed and not a moment longer. Cut her throat and remove her heart. That, my girl, is the only way to destroy the wretched creature.”

Greylock. A city supported by a network of scaffolding, bleeding rust and wheezing steam. Patrolled by an army of ‘metal men’—creatures who’re designed for nothing more than to kill and destroy. Nothing grows. Nothing truly lives.

The tower stands like an ice-pick, pushing through a snarl of thorns, resting upon the outskirts of Greylock. Its shadow is cast across the city like an elongated clock-hand, chipping away the hours, the days. The years. It is home to the Lady of Chains, a woman incarcerated without a sentence. A woman who almost single-handedly destroyed the world . . .

Viola, a young orphan girl, has been thrust into this nightmarish world by the devious Mrs Casket, caretaker of the tower and maid to the mysterious lady. She’s been given a task which could either see her demise or be her salvation.

But who is the Lady of Chains? And why does she insist that she is connected to Viola? With the clock ticking and the metal men drawing near, Viola is about to learn that not everything is what it seems . . .

A spellbinding fantasy with elements of steampunk.

INCLUDES THE SHORT STORIES;
Hansel and Gretel
Rogan and the Gargoyle
The Silent World

In my opinion, the star of this book is The Lady of Chains. I could take or leave the rest of it.

The Lady of Chains is dark, and intriguing, and I really wouldn't have minded if it was longer. As in the whole book. There were so many things within the story that I would have liked more information on. For instance: HOW did this lady destroy the world? Why? Why have her memories been removed? I have many others, but will stop there, since I don't want to spoil the book for anyone.

With all the questions I was left with, I feel that I either missed some crucial part(s) of the story, or that perhaps there will someday be a full book covering more of the details.