Last Off (A Novella) 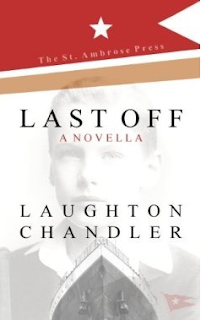 Last Off (A Novella)

Four young stowaways — illegal passengers, below even the 3rd class — find themselves on the R.M.S. Titanic, the grandest ocean liner in the world on her maiden voyage. At first unknown to each other, hailing from four different countries, they begin to learn about each others’ pasts as they bide their time in the bowels of the ship, united in their hopes of making a new life in America. When disaster strikes, what will become of them? Who, if any, will be able to escape the epic tragedy Walter Lord described as ‘the death of a small town’?

I really like the idea of this book.  There have been so many stories about the Titanic that have focused on the upper class.   It was interesting to hear the story from the perspective of one much lower down- as far down as a stowaway, hidden away in the depths of the ship.  I really enjoyed the reading historical aspect from a different view.  The stowaways each have their story which helped bring them to life.  Some of the writing seemed a bit stiff to me which is why I couldn't quite give the book 4 stars.  That having been said, I think this book would be enjoyed by readers of all ages.  It's a great story!