We are thrilled today to be part of the Firebolt Virtual Tour! Keep reading to see what I thought of the book, and learn a bit about the author! 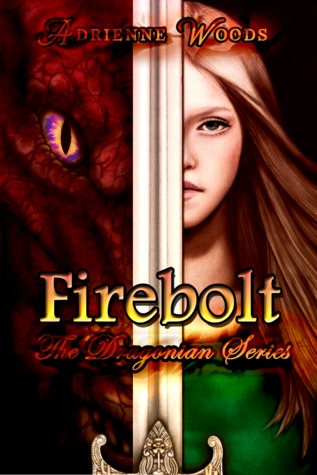 Dragons. Right. Teenage girls don’t believe in fairy tales, and sixteen-year old Elena Watkins was no different.
Until the night a fairy tale killed her father.
Now Elena’s in a new world, and a new school. The cutest guy around may be an evil dragon, a Prince wants Elena’s heart, and a long dead sorcerer may be waking up to kill her. Oh. And the only way Elena’s going to graduate is on the back of a dragon of her own.
Teenage girls don’t believe in fairy tales. Now it’s time for Elena to believe – in herself.

Honestly, as soon as I saw the cover I knew I had to read the book. Yep, that cool sword got me - I'm a sucker for swords. Maybe one of these days I should actually learn how to use a sword.......

Moving every three months, without explanation, rhyme, or reason. That's been Elena's life. All that is about to change, though, when her father is killed by an attacking dragon.

In this story, we've got your fish-out-of-water, girl-in-the-dark story when Elena learns she's been taken to a Bermuda Triangle world she cannot leave. Most of the people around her are, in fact, dragons. Great, I can easily take that in stride!

The book starts out quick-paced and attention-grabbing. After a little bit things slow down so Elena can try to dig out some answers - in between some of your typical high school drama. (Which, I admit, got a little tiresome here and there - there was just so much I felt could have been explored, but some of it got stunted in the HSDrama).

In the last part of the book, there are a series of tests that only Elena can face - there were some things in there I truly enjoyed.

I have to admit, this is not one of those books I couldn't walk away from for a bit - but I'm very curious to see where Ms. Woods will take us, along with Elena, next.


I was born and raised in South Africa, where I reside with my husband and two beautiful little girls till this day. I'm very passionate about my writing and my first novel Firebolt will be released the 20th November 2013. It's the first part of a four part series called The Dragonian Series. I'm planning to get the second part out next year same time.

When I'm not writing, I love to read and review other upcomming authors on my blog. I'm a host with a virtual tour company and I'm soon going to start reviewing for GMTA Publishers, who also will be publishing my series. Love, love, love my family, and wouldn't have been able to do any of this without their support.

Posted by Rebecca McKinnon at 4:30 AM