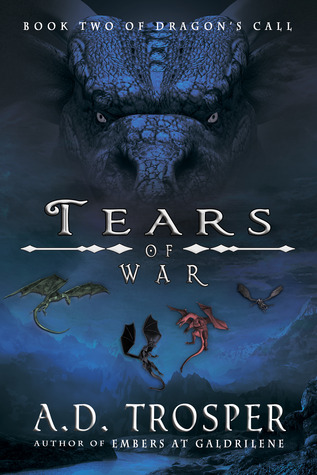 Faced with a looming war, the riders have no choice but to leave the safety of Galdrilene and reach out to the nations for help. But the Shadow Riders are doing the same and not all nations are opposed to their rule.

New discoveries are made, old wounds are reopened and betrayal hides among welcoming smiles.

As one nation begins to unravel it's clear that some choices, even those made with the best of intentions, can have devastating consequences.

After reading the first book of Dragon's Call, perhaps my expectations were a bit high. While Tears of War was interesting I felt it didn't quite live up to Embers at Galdrilene.

One of the reasons for this is that, with the introduction of even more characters, it got hard to keep straight who was who. I found myself getting confused more often than not. Perhaps this could have been helped if there had been the customary summary at the start of the book that reminds readers what happened in the first book. However, I think a character glossary at the beginning of the book would have been ideal.

Now that I've gotten my big negative out of the way . . .

The characters in this series are very interesting, and it's fun to get to know them even better. There's clearly - just from the title - more of a war coming, and we get a great battle scene near the end of the book where we learn just how serious this is, and that no one is guaranteed to make it through to the end of the series.

Obviously, the rest of this world is going to have to learn of the good dragons, as a war between the black dragons and the colored ones will be loud and obvious. One village in particular befriends the colored dragons and their riders, and I enjoyed watching these people (especially the children) interact with them.

There's one "mystery" in this book that I wish had been resolved. One of the riders is kidnapped, and it's more than hinted that there's a traitor in the midst of the Dragon Riders. Now, to me it felt very glaringly obvious who this traitor is (although it's always possible I'm wrong!), but it didn't come to a head in this book. Hopefully in the next installment, that will be gotten out of the way quickly.

If you enjoy fantasy, or dragons, or magic, this would be a good book for you to check out!