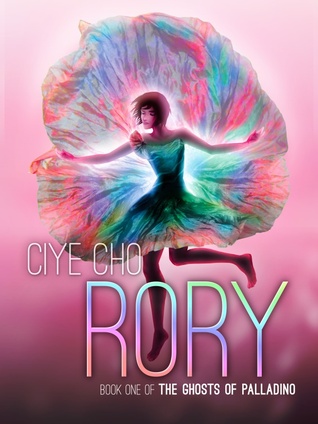 Rory (The Ghosts of Palladino, #1)
by Ciye Cho

Far beyond heaven, earth and hell is a city known as Palladino, a place ruled by ghosts and filled with demons, magic, and all sorts of darkly beautiful things. A city where no one can ever escape.

Eighteen-year-old Rory is a cake decorator who makes stunning confections. But no amount of frosting or miracles can save her when a demon kidnaps her—and carries her to Palladino. Here, Rory ends up in a deadly charm school where young women are forced to become companions for the Ghost Lords. And for her to survive, Rory must become everything that she isn’t: graceful, elegant... and perfect.

But nothing is what it seems in Palladino. Not the magic. Not the ghosts. And definitely not Martin Marius, the bizarre Ghost Lord-slash-inventor who is drawn to Rory. For amid a thousand machines and a hundred cats, Martin holds a secret that could change everything. A secret that could either free Rory... or destroy her.

As always, Mr. Cho's imagination shines brightly in this new series. As with his previous books, he takes us on a fascinating ride.

That said, I have to admit that while there are some really fantastic sections of this book, there are some that I could have done without. Although there are probably plenty of people who love the parts that felt to me as if they were dragging their feet.

One of the mysteries we're presented with at the start of the book - Rory's mother insisting Rory wasn't safe in the dark because of the monsters who come to spirit away young girls - was never explained. We have no idea exactly what her mother knew and how she knew it. I'm hopeful this will be resolved in the next book and is one of those tidbits meant to draw us on to the next chapter of the story.

This is a bit of a quirky read, and I mean that in the best way possible. And I really enjoyed the way Rory wasn't able to abandon who she was and fall in line with the other girls, it made her more realistic. Also, I loved the cake decorating talent!