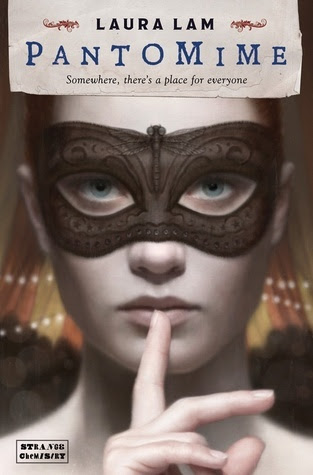 This is a pre-release review. Thanks to the publisher, Strange Chemistry, for the ARC.

R. H. Ragona’s Circus of Magic is the greatest circus of Ellada. Nestled among the glowing blue Penglass—remnants of a mysterious civilisation long gone—are wonders beyond the wildest imagination. It’s a place where anything seems possible, where if you close your eyes you can believe that the magic and knowledge of the vanished Chimaera is still there. It’s a place where anyone can hide.

Iphigenia Laurus, or Gene, the daughter of a noble family, is uncomfortable in corsets and crinoline, and prefers climbing trees to debutante balls. Micah Grey, a runaway living on the streets, joins the circus as an aerialist’s apprentice and soon becomes the circus’s rising star.

But Gene and Micah have balancing acts of their own to perform, and a secret in their blood that could unlock the mysteries of Ellada.

This review won't really discuss the book. Just saying. Not that I wouldn't talk about it, but I won't ruin it by sharing, well, much of anything.

Okay, if I'm being honest, I was slightly disappointed by this book. No, it wasn't bad. It wasn't even just so-so. It just wasn't as fabulous (to me) as the publisher's other books.

At first I thought I didn't like it. Really, the back-and-forth between what's happening "now" and what happened "before" just drove me out of my mind. Until about a quarter of the way in, when I loved both story lines, and it made the reading go faster because I was constantly looking forward to finding out what happened in two different stories.

Turns out, when the book ended, I was annoyed. Which means I liked it more than I realized.

I have to say, things felt kind of slow. I could feel/see the story leading toward some great things I was looking forward to, but they never happened. Not that they won't, just not in this book. A lot of time was spent dawdling, IMHO. Of course, we were getting to know our main character, and that counts for a lot. Just don't expect a fast-paced story.