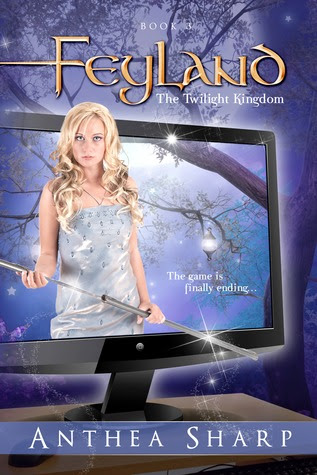 Faeries. Computer games. A boy from the wrong side of the tracks, and the girl he’s forbidden to love.

NOTE: Book 1 in the series, The Dark Realm, is currently on sale for only .99 cents at all ebook retailers!

Jennet Carter and Tam Linn are almost out of time. Feyland, the most immersive computer game ever designed, is about to be released into the world—along with the Realm of Faerie’s dangerous magic.

The faeries, desperate to break free from their realm, have set treacherous plans in motion. Despite magical allies of their own, Jennet and Tam have no idea what dire threats await, both in-game and out.

Battling for their lives against the united powers of the Dark Queen and Bright King, Jennet and Tam’s quest to stop the fey takes them into the perilous Twilight Kingdom, where illusion reigns—and magic can break all the rules.

You'll know how excited I was for this book when I say I read it--the whole thing--the very day I got it. It's been on my TBR list since I read book 1.

Ms. Sharp is a master storyteller. She's managed to create a phenomenal world, full of richly layered detail. A world I would love to be able to experience for myself.

The characters through this series have been impressive and diverse. I love that in this installment we get to know Zeg better--he's the kind of guy everyone needs for a friend! And we get a new character, Spark. No spoilers, but you will love her! (Or else.)

We've got excitement, tension, action, love (of many sorts), and much, much more. Would someone please make a movie or three out of these? Without ruining them, of course!

I've said it before, and I'll say it again: This is a must-read! Really. I'm not sure I know anyone who wouldn't enjoy it, and I can't imagine it not becoming a favorite for everyone who picks it up.

The Feyland books have found a prized place on my all-time favorite books list.

I can't give this book a star rating. There just aren't enough stars to give you an accurate idea of how phenomenal it is.
Posted by Rebecca McKinnon at 4:00 AM