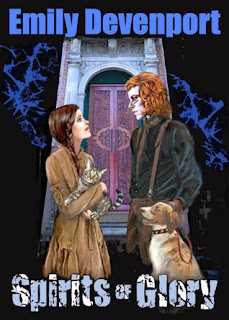 Spirits of Glory
by Emily Devenport

One morning the people of the North woke up and the people of the South were gone. That s the first thing every child learns on the colony world of Jigsaw. But for one girl, knowing about The Disappearance is not enough. Hawkeye wants to know why.

That's why she spent half her life researching The Disappearance. And that's also why eight Neighbors show up on her doorstep, demanding that she accompany them into the Forbidden Cities ruled by the Southern gods to speak with the Spirits of Glory. Everyone thinks Hawkeye is an expert on Neighbors, these almost-humans who move, talk, and think as if they were born inside one of the Time Fractures. But she can't imagine what they want to ask the ghosts of their ancestors, or why they need her to go along. The Southern gods caused every human inhabitant of the Southern cities to disappear overnight :&emdash; what else might they do?

But the Northern gods say Hawkeye should go and her curiosity won't let her refuse, even though she's going into more danger than she can imagine. Pain and puzzlement wait along the broken interstate, along with scavengers who want to kill them all. Hawkeye's questions only generate more questions as they move farther and farther into the South, right into the heart of the Disappearance, until Hawkeye's questions have all been answered.

Even the ones she was afraid to ask.


At first, this book seemed a little strange. That said, I did enjoy it, and I realized it only felt strange because it was so different from most of the books I've read lately.

The story is very well-written, and I was thrilled to find my expectations shattered repeatedly. Every time I thought I knew where the story was taking me, I was whipped around a blind curve in a completely unexpected direction. I love it when that happens!

I don't like spoilers, so I won't say any more, but if the blurb is at all intriguing to you, do yourself a favor. Read it!