Happy Birthday to Me Again 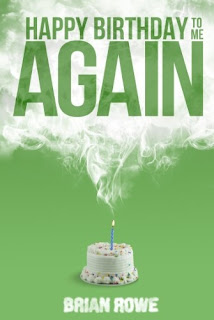 Happy Birthday to Me Again (Birthday Trilogy, #2)
by Brian Rowe

This book was provided to us by the author in exchange for an honest review.

Cameron Martin has a huge problem: he’s aging a whole year of his life with each passing day… again. And this time... he's going backward!

When Cameron proposes to his beloved witch of a girlfriend Liesel, he thinks life can’t get any better. But when he reluctantly breaks off the engagement just days before the wedding, Liesel angrily unleashes another curse on the unlucky guy, this time making him age backward, from eighteen, all the way to zero.

Making matters worse, Liesel mysteriously disappears, leaving Cameron with no options, except watching himself rapidly shrink into a helpless child. Will Liesel be able to save his life again? Or will Cameron ultimately fall prey to his girlfriend's wicked spell?

I have to say, this book was a little better than the first installment of this trilogy.

Cam, the main character, is a little more likeable in this one. Thank goodness! He's still an idiot, but at least he's an idiot who sometimes thinks of other people.

This time, instead of aging forward, he's aging backward. My first thought was "Couldn't the author come up with something different?" but then, as I read a bit more, it worked. The story was kind of predictable, but that didn't bother me.

If you liked Happy Birthday to Me, you'll enjoy this continuation.

Posted by Rebecca McKinnon at 7:56 AM