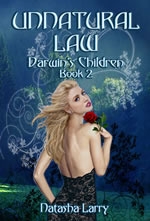 This book was provided to us in exchange for an honest review.

Seventeen-year-old Jaycie Lerner’s psycho-kinetic power surge is over, and her astounding powers are under control for the time being – sort of. As she struggles to maintain her humanity in the face of the awesome terror and responsibility of her abilities, she also yearns for the chance at a normal life – and a relationship with Matt Carter, the best friend she had to leave behind. But Matt’s got a few tricks up his sleeve, and he’s not about to give up on his feelings for Jaycie.

As Jaycie and her family grapple with the day-to-day routine of trying to keep their world together, Jaycie’s mother figure, Allison Young, endures a personal crisis of her own. The superhuman blonde possesses the physical equivalent of Jaycie’s awesome psychic power.

So evolved, at ninety-two she still looks twenty. But what good is extended life when everyone else around her is so fragile? With no one to share her unusual life, she’s a uniquely lonely woman yearning for the romantic love she sees all around her. But in a dream she gets her wish – and it quickly turns to a nightmare for everyone else in her life. The memory of a rose is all she can hold onto in the storm of obsession that nearly sweeps her away.

Things quickly turn deadly for the vampires, but the Dey-Vah Guard fairies refuse to acknowledge there’s an imbalance in the nature they protect. As the danger gets ever closer to Jaycie and her family, the race is on to find answers before a secret plot can destroy them.

I really liked the way this story unfolded. The book deals with the aftermath of Jaycie's surge (her powers surged, causing her to become much more powerful than she already was). She has to learn to control all this power, which is hard. It gets away from her sometimes, causing her to do things without thinking about the consequences.

Everyone's lives have been changed because of Jaycie's surge, and everyone's trying to settle into the new swing of things. We learn some interesting things about Matt, and wonder what exactly is going on with Allison.

This is a fun series, and I look forward to the next installment!

Posted by Rebecca McKinnon at 8:39 AM