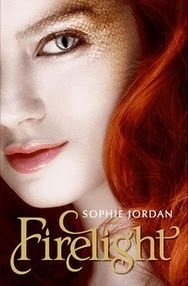 Marked as special at an early age, Jacinda knows her every move is watched. But she longs for freedom to make her own choices. When she breaks the most sacred tenet among her kind, she nearly pays with her life. Until a beautiful stranger saves her. A stranger who was sent to hunt those like her. For Jacinda is a draki—a descendant of dragons whose greatest defense is her secret ability to shift into human form.

Forced to flee into the mortal world with her family, Jacinda struggles to adapt to her new surroundings. The only bright light is Will. Gorgeous, elusive Will who stirs her inner draki to life. Although she is irresistibly drawn to him, Jacinda knows Will's dark secret: He and his family are hunters. She should avoid him at all costs. But her inner draki is slowly slipping away—if it dies she will be left as a human forever. She'll do anything to prevent that. Even if it means getting closer to her most dangerous enemy.

Mythical powers and breathtaking romance ignite in this story of a girl who defies all expectations and whose love crosses an ancient divide.


I've always loved dragons. I can't help myself. The idea of them is breathtaking, isn't it?

In Firelight, there is a twist to the legacy of the dragon: the descendants of dragons can appear in human form. They're shifters. If they're scared or angry, it's very hard to maintain their shift--the dragon wants to take over.

Jacinda, our main character and a draki, is dragged from the only home she's known by her mother and sister. They're trying to protect her, but they purposely take her to a desert where her draki will wither die.

Will comes from a family of dragon hunters. That should be enough to keep Jacinda away from him, but she's inexplicably drawn to him. Around him, her draki side thrives.

I thoroughly enjoyed this book. It twisted all over the place. I'm anxious to read the next book in the series! (I just hope the ebook version isn't $10 or I'll be waiting for it to go on sale. What can I say? I'm cheap.)