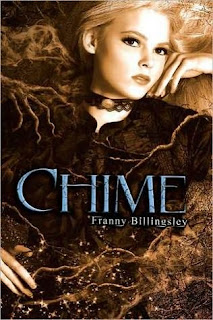 Chime
by Franny Billingsley
Hardcover, 361 pages
Published March 17th 2011 by Dial
Before Briony's stepmother died, she made sure Briony blamed herself for all the family's hardships. Now Briony has worn her guilt for so long it's become a second skin. She often escapes to the swamp, where she tells stories to the Old Ones, the spirits who haunt the marshes. But only witches can see the Old Ones, and in her village, witches are sentenced to death. Briony lives in fear her secret will be found out, even as she believes she deserves the worst kind of punishment.

Then Eldric comes along with his golden lion eyes and mane of tawny hair. He's as natural as the sun, and treats her as if she's extraordinary. And everything starts to change. As many secrets as Briony has been holding, there are secrets even she doesn't know.
***
This book had me hooked from the first page! The writing style was unique and almost odd while telling the story of Briony, a young girl struggling with herself. The story twists and turns with beautiful descriptions and doesn't always go the direction one would expect. Briony isn't intending to change anything in her life- she's made up of secrets, pain, and subsequent responsibilities- but things do change, so she does too. After I finished this book, I just had to let it settle for awhile before I could switch gears to something else- I didn't want to rush it! Chime feels like a mix of historical fiction (set in the time of witchcraft and superstition) and paranormal fantasy. It deals with love, hate, guilt and mercy, and who of us haven't had to deal with those? The writing and story are so different from much of what I've read and I totally loved it!
4/5 stars
Posted by Christine at 9:19 AM