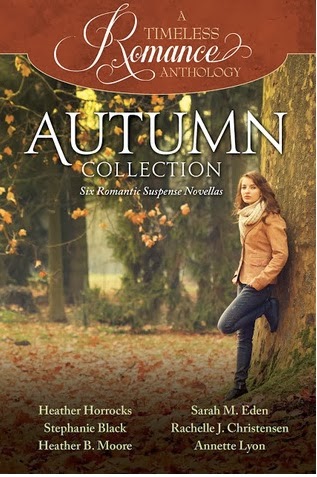 
Six Award-Winning Authors have contributed new stories to A Timeless Romance Anthology: Autumn Collection. Readers will love this collection of six romantic suspense novellas, all with one thing in common: Romance

Chocolate Obsessed, a captivating romantic suspense by Annette Lyon, we meet Whitney, an executive pastry chef who is working her resort’s booth at the New York Chocolate Show. The only problem is that she shares the shift with her arch rival, Stephen. But then an unexpected visitor shows up: Jeremy, a man who lost a dessert competition she judged. When Jeremy confronts her and becomes threatening, Stephen steps in and gets Jeremy dragged off by security. But that doesn’t throw Jeremy off for long; soon Stephen and Whitney are running for their lives.


Chocolate!  Of course it makes this short story sweeter.  It's packed with action and romance with some fun twists.  I really enjoyed it!