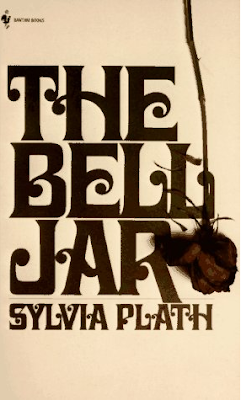 The Bell Jar
by Sylvia Plath


Plath was an excellent poet but is known to many for this largely autobiographical novel. The Bell Jar tells the story of a gifted young woman's mental breakdown beginning during a summer internship as a junior editor at a magazine in New York City in the early 1950s. The real Plath committed suicide in 1963 and left behind this scathingly sad, honest and perfectly-written book, which remains one of the best-told tales of a woman's descent into insanity.

The Bell Jar is the fascinating story of a college-age woman named Esther, whom Plath has based on herself.  She's bright and ambitious with a future full of opportunity.  As she grows and changes she struggles, as most do.  Her struggles led to dark places where her world became distorted.  It was easy to follow Esther and see how the distorted world was her reality.  We all see some things differently at various points in our life.  There was never one clear point where her sanity was suddenly gone, just a journey that broke her down.  It's heartbreaking and very real.  Even strong people can be fragile.  I think most people can relate to Esther in some way, at least at some point in their lives.  I love the author's writing style.   The imagery is beautifully woven into the story.  This is one of my new favorites- but I will read it with care and only when I have ample time to ponder.