For Evy Rivera, thunderstorms have always caused her physical pain, but she's never known why. When a record-setting storm arrives on the same night her father finds ancient ancestral documents, Evy is set aglow with mysterious tiny lightnings she can command.

Even worse, she alerts some people in the universe who've been looking for her family for a very long time.

Thrown back into ancient Spain and tasked with killing a Spanish legend, she must train alongside Constantine, a sexy yet obstinate Roman warrior. He teaches her how to wield her lightning as a weapon, through more errors than trials. With a relationship as explosive as their late-night training sessions, Evy and Constantine battle their push-pull relationship while trying to ignore the two-thousand-year difference in their birthdates.

Ilif Rotiart, her quasi-mentor, is appalled at Evy's skill. He would prefer to train her father and keep Evy on the sidelines—where women belong. Evy has a feeling Ilif is keeping something from them, but she must play nice until she uncovers the truth. And if he's lying, it will be the worst day of his four-hundred-year life.

Penya Sepadas claims she's Evy's rightful trainer, and she has the prophecy to prove it. Penya doesn't share Ilif's misogynistic attitude, but she does have her own agenda...and her own secrets.

Evy must sort through the lies and find the truth behind her family's time-traveling past before the wrong history obliterates the future. She’s spent her whole life fighting for her place. Now, as the first female lightning rider, she'll dedicate her existence to fighting to save the world.

But will Evy learn to manage her lightning and find the truth before it's too late?

Lightning Rider is a unique, action-packed book featuring a girl named Evy.  This isn't one of those books where the girl sits back saying, "someone save me!"  Evy is a bike building, motorcycle riding chick with lightning powers who can travel through time.  The author has created such a cool concept with how the lightning works- it's really well thought out.  The characters are fun and easy to relate to while the setting is creative and fun. Can't wait for the sequel! 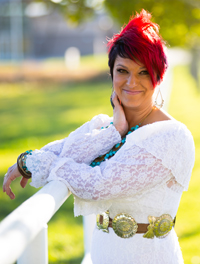 Author Bio:
From the moment she decided on a degree in Equestrian Studies, Jen Greyson’s life has been one unscripted adventure after another. Leaving the cowboy state of Wyoming to train show horses in France, Switzerland, and Germany, she’s lived life without much of a plan, but always a book in her suitcase. Now a wife and mom to two young boys, she relies on her adventurous, passionate characters to be the risk- takers.
Jen also writes university courses and corporate training material when she’s not enjoying the wilds of the west via wakeboard or snowmobile.