Just a Kiss Away 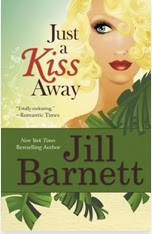 Just a Kiss Away
by Jill Barnett

Arriving on a lush Pacific island, Eulalie Grace LaRue was soon to be reunited with the father she hadn't seen since childhood. Yet before Lollie's dreamed-of meeting could take place, the lovely Southern belle was caught in the crossfire of a violent revolution -- and thrown into the rugged arms of Sam Forester.


On the run in the jungle, the battle-scarred soldier of fortune didn't know what to do with the pampered blonde placed in his care. Survival was his top priority, but he could not resist Lollie's seductive charm...or deny the growing attraction between them. Though Sam thrived on chance and risk, falling in love was the one chance he wasn't willing to take.


Powerless against the desire that consumed them both, Lollie surrendered to his passionate embrace. But when he dismissed her affections, she was determined to fight for him...to prove that in the steamy heat of paradise, two hearts would find the love of a lifetime....
***
Overall, I would have to say this book is... long. The concept of it sounds fun but it's so redundant. Some of the situations change (although they're still similar) but the reactions of the characters are just the same thing over and over again. I found Lollie, the main female character, annoying at best. She was supposed annoy the soldier but in a way that he came to love her. As I reader I got really sick of her too- with no redemption. I also skipped ahead a few times when things started heating up- I don't enjoy explicit material. I know there are those out there who enjoy this sort of book, but I'm not one of them.
1/5 stars

Posted by Christine at 5:00 AM