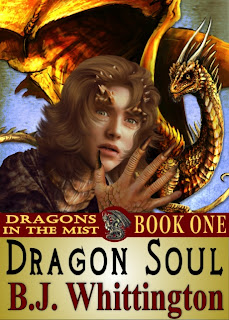 Dragon Soul (Dragons in the Mist, #1)
by B.J. Whittington

Dragon Soul begins in a small village of the Palmir people. A quiet, productive and peaceful clan with an almost forgotten violent history. The Plague from the North—an attack of powerful, evil creatures—virtually annihilated them generations ago. They defeated the Plague, with the help of mystics and dragons - but at great cost. Dragons no longer survive as separate entities; their Souls must reside in the flesh of human hosts.

To be a Dragon Host is at once a tremendous honor, and a life sentence. A sentence of many lifetimes, as the Dragon Host’s life span becomes longer than normal humans; they usually outlive their human families by many years. Dragon Hosts have magnified senses and abilities. To Host a dragon is to the see the world in entirely different ways - forever.

Hosting of Dragon Souls is not the only special calling of the Palmir people. Some are called to be Healers, a blending of practical and mystical powers. A rare few are Prophets. One Prophet has a vision that takes shape in a physical form and warns the Palmir people of an ominous event. Was it a just a reminder of the hellish past, or a harbinger of things to come?

What if the Plague returns? There are so few Dragon Souls. Could they defeat the monsters again? And what of real dragons? Will they ever again exist in their own form?

From a peaceful and uncomplicated world, with only the little frustrations that human characters inflict on one another, events thrust the reader into epic battles between dragons and the creatures seeking to destroy human and dragon alike. Proceedings propel humans into the middle of dragon-sized events. The world of the people is so rich, yet simple and comfortable, it's heart-breaking to leave it for the battlefront. Nevertheless, the Palmir people, like the dragons, go willingly in defense of their families. And in these stories, the families of humans and dragons, are one.

First, I should tell you that I cut the blurb down a bit because it was so long. If you'd like to read the rest of it, please see Amazon or GoodReads. GoodReads does have the old cover image (which I totally love!), so be aware of that when you're looking for it.

There were a lot of really good things about this book. There were some great characters, and the story was very well-developed. One of my favorite characters didn't play a large part in this story, but unless I'm mistaken, her part will get bigger as the series progresses.

I loved the idea of the dragon and person sharing one body, being able to transform between dragon and human. That does mean a lot of the communication happens either inside the dragon's head, or inside the Dragon Host's head.

That said, I have to say the dragons fell into the hole that is one of my pet peeves. When the dragons speak, they use thee, thou, thy, which in and of itself is fine. But they were sometimes used interchangeably, and none of the language around those words were changed to be appropriate. As an example: thou are instead of thou art. I admit, that's me being picky, but it drives me absolutely crazy, and pulled me out of the story whenever it happened. There were plenty of times where I had to put the book down and walk away because of it.

Overall, a good read. Anyone who enjoys dragon stories will appreciate it.