Chase Tinker and the House of Magic 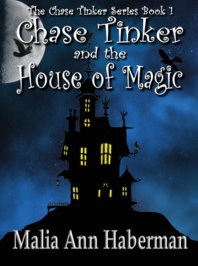 In Chase Tinker's world, magic, lies and secrets can be a lethal combination...

***
I need more!  What an exciting, magical adventure!  Chase Tinker and the House of Magic is a fun book with creative surprises that kept me hooked to the end.  The character interactions and personalities really drew me in.  I like how the characters have reactions and opinions all their own.  They definitely act their age, which makes it fun for kids of all ages.  The setting is magical and fun.   The author's descriptions paint such vivid pictures-  just by reading you can step into the world of the Tinkers.  I love their magical house with the unusual powers of the various rooms and individuals.  I want to move in too!  Malia Ann Haberman  is such a clever author!  I can't wait for more!
5/5 stars

Check back tomorrow for an interview with author Malia Ann Haberman along with a giveaway!
Posted by Christine at 5:00 AM