Beneath the Slashings Blog Tour 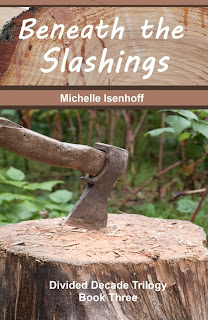 We are excited to welcome Michelle Isenhoff, children's novelist, and to be one of the many stops on her blog tour!

Beneath the Slashings (Divided Decade Trilogy, #3)

Paperback, 173 pages
August 1st 2012
This book was provided to us as an ARC by the author in exchange for an honest review.

After four uncertain years of war, twelve-year-old Grace Nickerson is desperate to return to a sense of normalcy. But when her father returns from the army, he sells the farm and drags the family off to a lumber camp in Michigan's northern wilderness. Grace is devastated; she's never been brave. When her tears and tantrums won't change Pa's mind, she stops speaking to him altogether.
Grace spends long hours working with her brother Sam and Ivan, the surly Russian cook, but at least in the kitchen she is safe from the lumberjacks. She's seen them from the window. They're rough, unkept, and terrifying. But slowly, with Sam's help, she comes to understand they're all missing home and recovering from loss, just like she is. Her fear begins to evaporate--until she learns one of them is trying to kill Pa.
Who is sabotaging the camp, and why? Will the winter in the woods bring the healing Grace needs? Or will it drive a wedge into her family?

Interview
I recently interviewed Michelle Isenhoff and really enjoyed the opportunity!
Here's what she shared with us!

Are all of your books historical fiction?

Not all of them, but four out of five are.  My first two books were inspired by family vacations to historical sites, so historical fiction sort of gave me my running start.  But HF has some definite boundaries that can be challenging to write inside of, so at one point I cast aside the research and wrote a fantasy (The Quill Pen) just for fun.  It was a refreshing change to let my story go anywhere it led.  Even so, my setting ended up decidedly historical.

Do you have any other books in the works?

I sure do.  I have a second fantasy (Song of the Mountain) due out in November.  This one takes place in ancient China.  Here's the blurb:

Orphaned at a young age, thirteen-year-old Wei Song has grown up listening to his grandfather recite legends of the distant past.  But it is his own history Song seeks to uncover to guide him toward the future, particularly the events surrounding his parents' deaths.  But that is a secret closely guarded by his grandfather.  Then Song discovers a puzzle box that links him to an ancient prophecy.  His destiny lies within the old tales he has scorned.  Song must follow the path that killed his father.

Then in November I have to decide which of four story ideas I want to pursue next.


If you could "move in" to any book or time frame, what would you choose?

If I had a time machine, I’d travel back to Colonial America.  I would visit Philadelphia, Boston, New York, and Williamsburg in the fifty years leading up to revolution.  But eventually I think I’d settle in the Appalachians.  I’d be one of those pioneers pushing the limits of civilization.  (Think Last of the Mohicans.)  Of course if Indians attacked or if I had a medical emergency, I’d probably dash off home in my machine!

Do you have a favorite book(s) or author(s)?

I have many, and they rotate rankings all the time.  Today my top five would probably include Gary D. Schmidt, Avi, JK Rowling, Elizabeth George Speare, and Beverly Cleary.

What would YOU like your readers to know about this book or you in general?
I would like my readers, specifically parents and teachers, to know that while my books are adventurous and entertaining, they also pack a lot of substance.  They’re about learning, maturing, growing and bettering.  When a child closes the back cover, I want kids and adults to think, “That was worth the time spent on it.”


***
Review
I recently had the opportunity to read Beneath the Slashings and here's my review!
I really enjoyed this book!  Beneath the Slashings is a work of historical fiction which tells the story of Grace, a young girl who's facing many struggles and changes in her life.  As the book begins, Grace has already suffered many hardships and is looking forward to her life getting back to the way it used to be.  She doesn't know that more changes are on the way and her entire world will be turned upside down.   I loved the various personalities and mannerisms of the characters in this book.  As Grace learns to look  past the appearances and exteriors of others, she finds they aren't so different from her after all.  She is able to make friends with people from various backgrounds and lifestyles.  I think many people can relate to Grace and also to her father as life changes and they must learn to adjust and find a place in the world.  Grace shows us that friends can be found in unlikely places and that with strength and courage we can face the unknown.
5/5 stars


I had the opportunity to review the first two books in this trilogy too.  Click to see the reviews:  The Candle Star (#1)  and Broken Ladders (#2).
Where to find the author:

Where to find Beneath the Slashings:
Kindle
Nook
Paperback
Smashwords


Thanks to Michelle Isenhoff for including us on your tour!  We've enjoyed it!