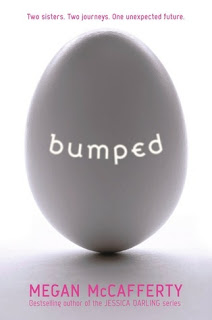 When a virus makes everyone over the age of eighteen infertile, would-be parents pay teen girls to conceive and give birth to their children, making teens the most prized members of society. Girls sport fake baby bumps and the school cafeteria stocks folic-acid-infused food.

Sixteen-year-old identical twins Melody and Harmony were separated at birth and have never met until the day Harmony shows up on Melody’s doorstep. Up to now, the twins have followed completely opposite paths. Melody has scored an enviable conception contract with a couple called the Jaydens. While they are searching for the perfect partner for Melody to bump with, she is fighting her attraction to her best friend, Zen, who is way too short for the job.

Harmony has spent her whole life in Goodside, a religious community, preparing to be a wife and mother. She believes her calling is to convince Melody that pregging for profit is a sin. But Harmony has secrets of her own that she is running from.

When Melody is finally matched with the world-famous, genetically flawless Jondoe, both girls’ lives are changed forever. A case of mistaken identity takes them on a journey neither could have ever imagined, one that makes Melody and Harmony realize they have so much more than just DNA in common.

For the most part, I enjoyed the book. The premise was interesting, and I think the story was told really well. I could see this sort of society actually happen under the right circumstances.

I did care (most of the time) about the characters and what happened to them. My favorite character? Zen. Could we please get a bit more of him? He has such potential, I just wanted to see him get his fair share of the spotlight.

I've read some reviews by people who, for one reason or another, didn't like the ending. From where I'm sitting it was a great way to bow out until the next book.

Now, just to be up-front, I wouldn't let my teenage daughter near the book (although, with the right teen, it could be a GREAT topic of conversation). BUT this isn't a "Teen" book, it's a "YA" book and YES, there is a difference, even if most bookstores and libraries don't break it down.